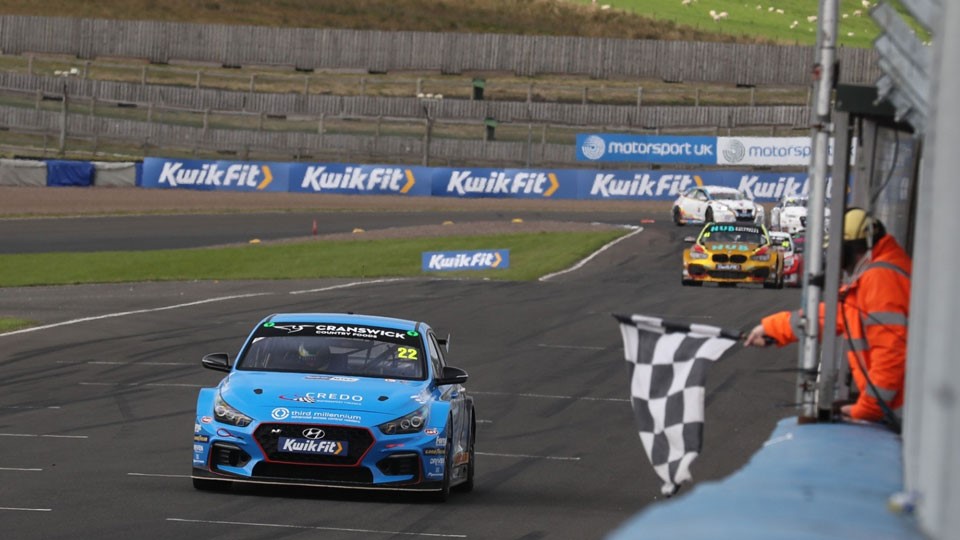 Silverware and another reverse grid pole were the highlights of an ever-improving trip up north for the Hyundai i30 Fastback N Performance cars. Both Senna Proctor and Chris Smiley showed flashes of brilliance around the 2km undulating Knockhill Circuit, as the pair continue their run of scoring at least a point in every race they have finished this year. This time it was Proctor who took the spoils for the Draper Tools sponsored squad, adding to the second place that Smiley received at Donington Park. The strong result leaves EXCELR8 fifth in the Overall Teams Championship on 137 points at the end of a promising weekend and fourth in the Independent standings. His second place during an interrupted race three helps lift Senna Proctor to the top 10 in the Driver’s Championship on a weekend he celebrated his one hundredth British Touring Car Championship race. Meanwhile two top ten places for Smiley puts him in a strong position before Thruxton. 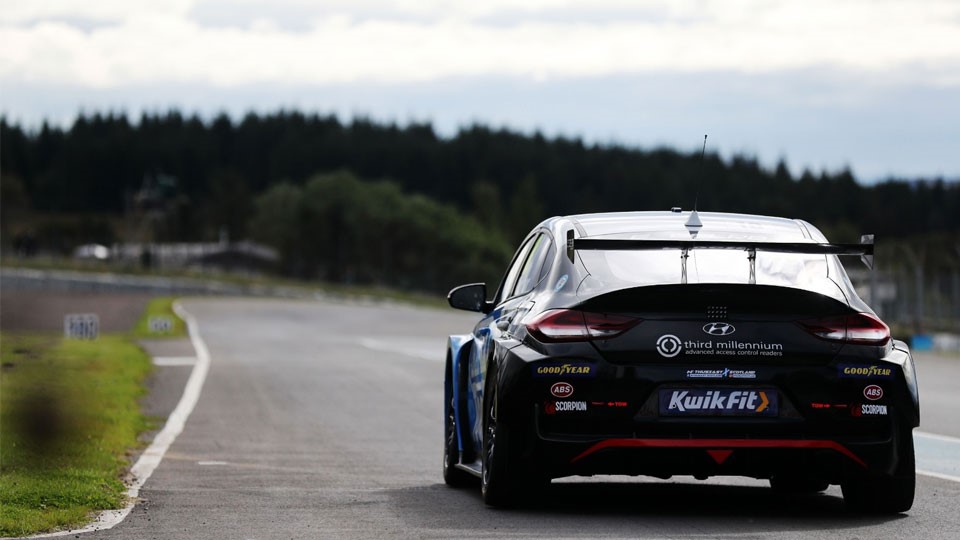 SATURDAY SHAKEDOWN Senna Proctor #18 – 15th Overall (10th Independent) Chris Smiley #22 – 19th Overall (14th Independent) Unlike Oulton Park, Proctor and Smiley emerged to a dry track at Knockhill, albeit a mere 15°C at the height of August. Quick to prove the Hyundai’s abilities, both drivers were immediately setting fast laps, though ended FP1 outside the top ten due to under a second separating them and the fastest time overall. FP2 was a similar story for the Credo-sponsored pair, focusing on long-run pace as they adapted to the Scottish circuit. Proctor would shine shortly before the red flag, going second overall, before ending practice in sixth after a late sprint from their BTCC rivals. Smiley’s lap would be a mere two tenths slower, yet only enough for sixteenth. Qualifying was going to be tight affair for the whole field, with under 1 second separating 1st to 24th. As a result, any small mistake or weight would cost the Touring Car drivers, mostly affecting Chris Smiley who was forced to carry 12kg into the meeting. Finding space on track, Proctor re-emerged in a promising top ten position until a red flag interrupted proceedings. As a result, the pair would line-up 15th and 19th, not reflecting the pace of the car from free practice. Proctor had been 12th prior to the stoppage and was disappointed to drop three places, despite also improving upon his personal best.
RACE 1 Senna Proctor #18 – 13th Overall (8th Independent) Chris Smiley #22 – 14th Overall (9th Independent) A lightning start by Chris Smiley saw him leap three places on the opening lap, with the pair running line astern and chasing the battle for tenth, that was being held up by Stephen Jelley (Team Parker Racing). When Josh Cook’s (BTC Racing) accident brought out the safety car, both drivers were comfortably running inside the points. Proctor still had higher aspirations but found himself stuck behind Oulton Park race winner Adam Morgan (TripleR Racing), unable to make the strides through the order that the Hyundai was clearly capable of. Despite this, Proctor, as well as Smiley right behind, continued their record of scoring in every race they’ve finished this season, with a 13th and 14th places overall. For Smiley, his jump of five places from his grid spot was the equal most of any driver in race one. An incredible result considering the ballast he was carrying.
RACE 2 Chris Smiley #22 – 9th Overall (5th Independent) Senna Proctor #18 – 11th Overall (7th Independent) All eyes were on Chris Smiley at the start, gaining another three places on the opening lap and again heading forwards for the Evolution-sponsored Hyundai. By lap six, he was up to tenth overall, though again an EXCELR8 car found themselves held up by Adam Morgan. Celebrating his 100th race start, Senna Proctor was once again battling for points, this time chasing down Smiley after dropping a few places on the opening lap due to the sloping start line. Two safety cars would interrupt each drivers progress, but Proctor was far from done, taking advantage to jump up to the key twelfth place, to give himself a chance of reverse grid pole. Smiley and Proctor were soon chasing the top ten as the Northern Irish driver battled with championship contender Rory Butcher (Motorbase Performance). Testament to Smiley’s skills, the EXCELR8 driver would remain in front, scoring a top 5 in the independents as Proctor completed the Butcher sandwich.
RACE 3 Senna Proctor #18 – 2nd (2nd Independent) – 70 points (10th) Chris Smiley #22 – 7th (5th Independent) – 68 points (11th) For the second time in four rounds, EXCELR8 would pick up a reverse grid pole, though this time it was Proctor leading the BTCC field away with teammate Smiley directly behind on the grid. After a restart due to a red flag, both honed their defensive skills as Smiley carried 12kg of ballast. An unfortunate first few laps saw Smiley bumped down to seventh, though Proctor, who had initially let Butcher go, spent the event keeping the gap down to the Motorbase driver. Putting in his race of the season, Proctor managed his 101st start to secure his best result of the year and maiden silverware for the EXCELR8 Motorsport team, their second of the season. Reverse pole to second was a copy of Smiley’s success at Donington Park and with the Northern Irish driver holding off multiple-winners and champion Colin Turkington (Team BMW), Smiley made it a double top 5 in the independents. 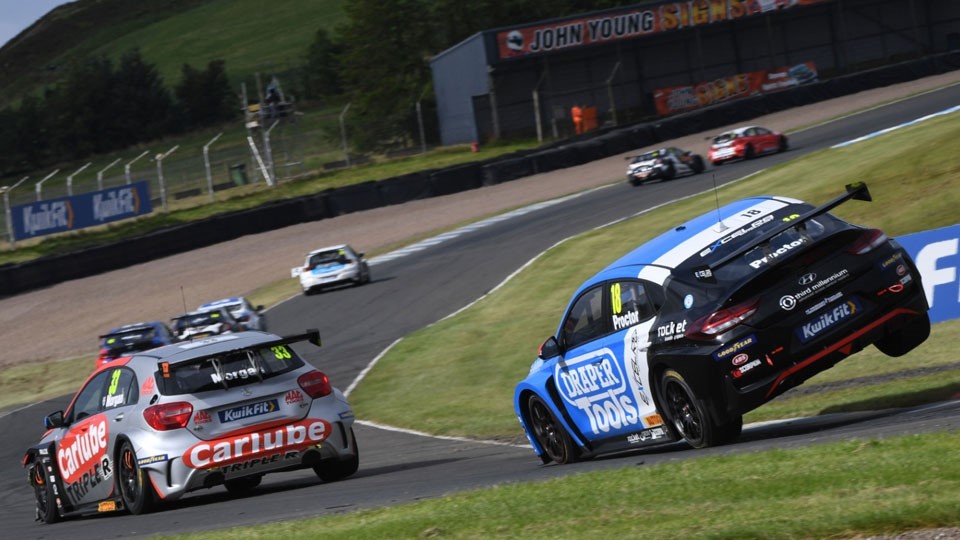 QUOTES Chris Smiley, who leaves the weekend with 68 points, said; “I’ve kept my nose clean and got another three points finishes, two of which were in the top 10. Race one the car felt ok, race two the car felt excellent, and in race three there were a few hard moves that caused me to drop backwards. I really, really had to fight for that seventh place. “I had to make it wide, placing it on the right line to fight off the rear wheeled drive cars. I’m pleased with Sunday, especially when you compare it with Saturday, we moved forward a lot, finding improvements in the car which is always great news. “We leave the tightest circuit of the year with no damage, so we’re glad to finish with more positives than negatives.” Fresh off his first podium of the year, Senna Proctor commented; “First few races we struggled a little bit with pace but made some changes to the Hyundai before race three and managed to extract some pace out of it. So, I’m very happy with the result, we need to keep chipping away with the car and making further progress. Once we got into the clear air in race three, we showed what the car could do. It’s a testament to the team building two brand new cars, and they’re quick straight out of the box. It’s a tough track to overtake on at the best of times, we didn’t have enough of a pace advantage to get some drivers, but I knew in race two had to get as high up as possible in order to get that reverse grid, to give us the best chance. It’s the first time I’ve slipped into the top 10 in the championship, so hopefully if I can keep scoring points, bringing home a few trophies, then we could be in a good place at the end of the year to battle for the top six or seven in the standings.” Team Owner Justina Williams concluded; “I am overjoyed for the whole EXCELR8 Motorsport team. It’s been a fantastic end to what had started as a fairly mediocre weekend. Both Senna and Chris did an amazing job in pushing forward and demonstrating the ever-accelerating philosophy of the team, especially on a circuit where our testing was limited. “Four rounds in five weeks has been an incredible effort by all of the team and to end this initial run of races with more silverware has been richly deserved. We are so pleased Senna gets to share this experience with us during the weekend of his 100th race, while Chris’ defensive display in race three is a testament to his skill and ability. Now time for a recharge, before we’re back at Thruxton.” The next British Touring Car Championship event takes place at Thruxton on 19-20th September 2020. 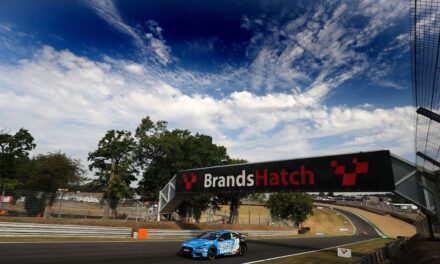 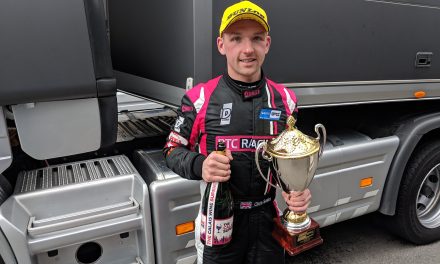 A Win in the Independent Championship Round 4 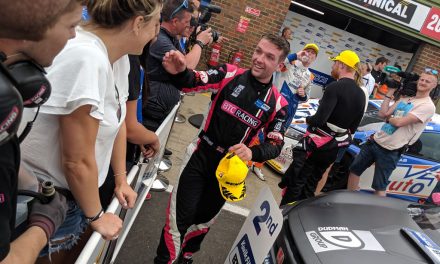 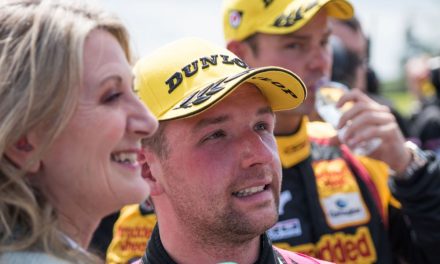 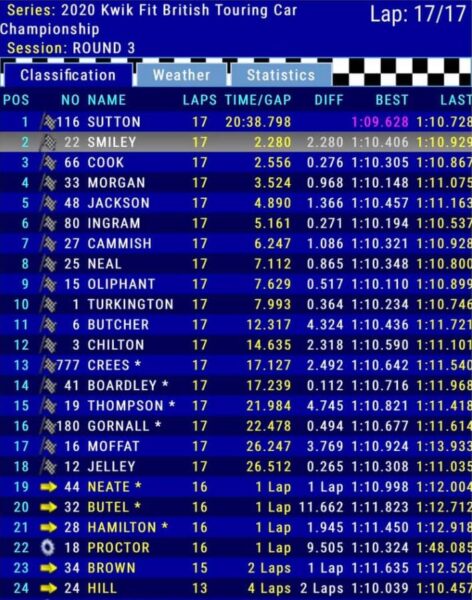